Cyberattacks: The Many Faces of Cybercrime

At age 15, Kevin Mitnick started his notorious hacking career by bypassing the punch card system for Los Angeles’ public buses. By the age of 32, he had hacked into such companies as AT&T, IBM, Nokia, and Motorola.

Companies of all sizes can fall victim to cybercrime, and the way it happens is not always the typical hacking scenario you see in movies. Often, the break-in occurs with no computers, lines of code or algorithms.

Cybercrime can be as subtle as gaining the trust of an unsuspecting employee.

Social engineering – the psychological use of manipulation, influence and deception to get people to perform certain actions or give out secure data – is a large part of cybercrime today.

In fact, Mitnick’s philosophy is that it is easier to trick someone into giving you their password than it is to hack into a system. 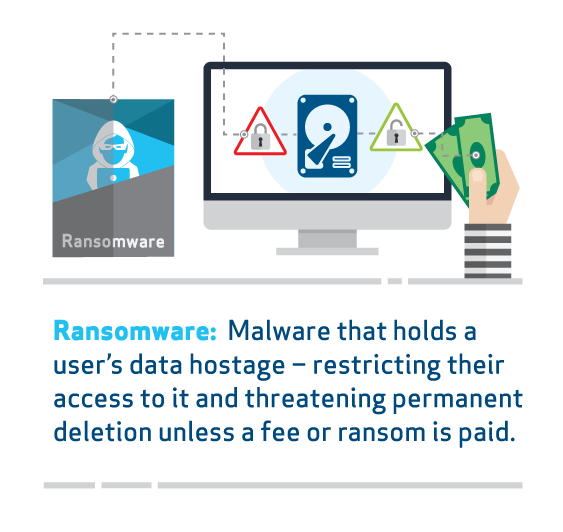 He has used tactics such as posing as a customer, an employee or a workman to get the information he needed.

Psychological warfare is also rampant in cyberspace as well – we’ve all seen messages popping up on websites asking you to click them. This is phishing, and its sole purpose is to drive you to provide personal information by posing as a legitimate source that needs your information, such as a social network, search engine or a financial institution.

Other types of cyberattacks include viruses, malware and Trojans that can appear as either fake anti-virus software or an attached document in an email. In fact, malware is the most common type of assault companies are likely to face. Some organizations have received as many as 17,000 malware alerts in a week, a time-consuming distraction that can cost up to $1.27 million per year.

Cyberattacks can also include extorting people for money. Dubbed “ransomware”, this type of malware either restricts a user’s access to their their data or threatens to permanently destroy the data if not paid a certain amount of money.

Cybercrime is a global epidemic, and it’s costly – estimated to be $400 billion by security software giant McAfee. That cost is a hacker’s gain – it’s so lucrative to hackers that they are always finding new ways to expand their reach.

Things will only get worse. Techradar lists cybersecurity threats and trends that are coming our way in 2015:

The good news is that more companies are taking it seriously, seeing it a big business risk rather than just an IT issue. Experts predict that more are going to adopt a holistic cybersecurity approach because of the never-ending cycle of technological advancement.

In the meantime, you can count on us to keep you informed of the newest and best methods to protect yourself and your company from cyberattacks.

Get News and IT Insights

Subscribe to our blog and stay on top of developments in the tech world.