Get Ready for Microsoft Server 2016

Microsoft Server 2003 End of Support came and went, and now it’s on to bigger and brighter options in the Windows family of server operating systems! Currently in its third technical release and due for final release in 2016, the newest server OS version MS Server 2016 is expected to take a substantial step forward with a host of features and upgrades over the previous version, MS Server 2012 R2 .

What does this mean for you? The answer depends on what version you’re currently using.

If you’re on 2012/2012 R2, an upgrade and migration to 2016 will mean a decent uptick in features and capabilities, and prolonging the investment in an upgrade of forced obsolescence in the next year or two anyway as experienced by our many friends and clients we’ve helped shift from the now unsupported Server 2003.

Server 2008/2008 R2 users will enjoy the same extension of their current server’s obsolescence and an even bigger bump in OS features, enhanced security, and capabilities. Of course, much like those on Server 2003 experienced in July, there will come a time when upgrade and migration from the current server version becomes an inevitable investment. Mainstream Support for Server 2008 has already ended as of January of this year, and extended support (that period of progressive server-version death) is set for early 2020. Though that sounds a good ways off, keep in mind that the extended support period is that time frame when patches become less frequent, support less robust and more costly, and security begins its decline. Our Server 2003 friends know this scenario well.

And those still on 2003… Yes, you with the sheepish and guilty look. 2016’s final release is still a handful of months away, but every moment you spend unsupported is a moment you are vulnerable to any number of ills – from viruses, to intrusion attempts, to errors/crashes. If you are still on 2003, contact us immediately so we can help you plan and secure your server OS and network.  Loss of data is only one potential consequence of the very risky decision to stay on the now defunct 2003. 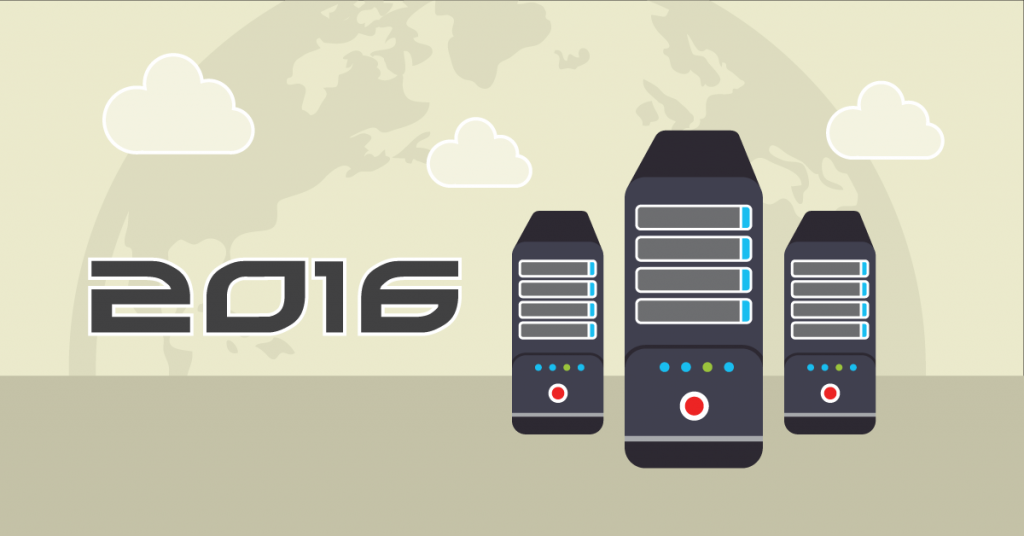 Though definitely overshadowed by all the hype swirled up for Windows 10, MS Server 2016 claims to be leagues ahead of all other server technologies available today. Some of 2016 Server’s exciting new features follow based on the most recent technical preview released by Microsoft a couple of weeks ago.

Containers are a method of roping off applications or groups of applications, isolating them from the rest of the system so that testing, simulating, and maintenance at the app-level can be done safely, securely and with less of a hit to workloads. Containers significantly improve the productive oversight of applications on the server and the integrity of the data there. They are essentially isolated, portable, resource-controlled OS environments. And with Server 2016, containers and support for use of containers ensure that discrete work on applications doesn’t hurt other system applications, data and settings, or overall system performance. Server 2016 also provides for the use of Hyper-V Containers – virtual containers on steroids. A Hyper-V container can completely isolate an app by segregating it and running it on a separate Virtual Machine (VM), allowing you to scale workloads and performance based on the demands of your network easily.

Also in the containers category comes Docker. Server 2016 brings in strong support for “Docker” – the open-source engine that was originally developed for Linux. It was designed to simplify the creation, operation, and management of containers. Server 2016 will have built-in support for Docker and has largely based the “containerization” methods of Server 2016 around Docker and DockerHub.

Server 2016 is designed to be very user friendly. Unlike with previous Microsoft servers, you can adjust your minimum and maximum RAM settings in Server 2016 even if the VM is running. A major boost to productively managing load, you can now increase and decrease memory allocations and even add or remove network adapters without having to turn off the virtual machine.

Creating a virtual machine traditionally has been done only by using a physical server as the origination point. As might expect and many of you reading well know, this has some obvious limits in terms of size, cost in physical assets, flexibility, and productive limitations. Server 2016 takes a major step forward in flexibility and capability with nested virtualization.  Nested virtualization transcends the VM-from-physical limits, allowing you to create a VM via a cloud server.  You can imagine the breeze that’ll mean for your testing and simulations using Hyper-V Containers, not to mention the speed.

Server 2016 marks Microsoft’s first notable attempt at offering a server technology that is fully accessible to the public regardless of OS. Microsoft aims to make all the features of the server usable with any operating system, starting with Linux. Linux users can now also fully utilize Secure Boot, a security measure that makes containers invulnerable from root kits and other kinds of boot-time malware.

We’ve been generally pleased with the incremental enhancements Microsoft has provided in its jumps from Server 2003 to 2008 to 2012 to what we’re seeing in this third technical release of Server 2016 that landed on August 18. Our typical policy – even as a vetted, listed and certified Microsoft partner – is to reservedly hold back on public praise until after final software roll-out. That said, our early impression is that Microsoft Server 2016 is shaping up to be easily one of the the most superior server OS versions we’ve seen. With significant steps forward in capacity, productivity and functional server management, Server 2016 opens up server capability with never-before-seen features that we’re really excited about, and we know you’ll be excited about too. Based on how the server OS is shaping up, we’ll be recommending Server 2016 post-launch to our friends and clients. So if you’re already planning for a data migration next year, our early vote is for Server 2016 as a very solid choice.

If you are planning a migration, and would like advice or a hand with carrying it out, we’d love to help. If you are unsure about where to take your current tech stack or server network, we can help there too. Contact us below by clicking the “Ask an Expert” button to get in touch with us today.